by Adam, Bob and Nikki 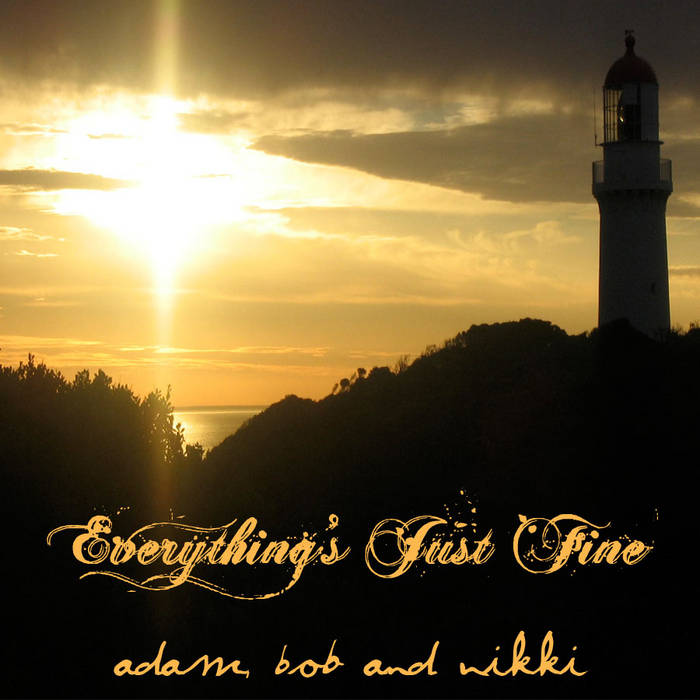 Exploring themes of war, revenge, redemption, loneliness and longing, “Everything’s Just Fine” is a 24-minute improvisational journey into the heart of human darkness.

This is the first offering from adambobandnikki, a collaborative jazz/spoken word/rock improv fusion project featuring Adam Sieverson on drums, Bob Leone on keys and Nikki Patin on vocals.

Recorded, mixed and mastered by Buddy Goettsch on a rainy day over Labor Day weekend in his home studio, the “Everything’s Just Fine” EP represents the essence of what adambobandnikki do best: get into a room and play.

The music itself is created out of the energy of the moment. The lyrics and vocals provide the only structure. What’s remarkable about the way adambobandnikki work together is that much of the intangible, improvisational energy can be found in the connections between drummer and vocalist, drummer and keyboardist and keyboardist and vocalist…a musical triangle formed by the two-way connections between each musician.

The first track on “Everything’s Just Fine” is the title track and is deliciously misleading. Everything, in fact, is NOT just fine and the lyrics reflect the struggle between putting on a good face for the world and acknowledging the turmoil that’s just beneath the surface.

“Via Satellite” was written right after the WTC bombings on September 11, 2001. The lyrics explore how many of us in the Western world experience war and tragedy via, literally, satellite…how the devastating images of violence and despair are transmitted to us through the news and how experiencing such tragedy second-hand can desensitize us and disconnect us from empathizing with our fellow human beings.

Opposite to empathy is revenge. “Letter to an Ex-Song” details the meticulous methods by which a cheating ex-lover should be violently punished, using physical torture as a metaphor for the emotional pain inflicted by infidelity.

The safety of arms with no malice is what any hurting being desires.
“Rock Me” is about the nightmare that is rape and the comfort desired in the aftermath of such horror. It is a plaintive cry to a lover, a friend, a parent to “rock me like the little girl I never was”. Though we don’t intend to, we often treat rape victims/sexual assault survivors as untouchable or re-traumatize them by not knowing how to touch or comfort them.

“Do You Know?” was written in the aftermath of an abusive relationship. The refrain of “do you know what that will do to you?” was written to both abuser and those standing outside the abusive relationship. Many times, people have an opinion of what they would do if their lover turned violent. It’s hard to know unless you’ve experienced it and the final track expresses some of that experience: the confusion, the self-blame and the utter, infinite sadness of suffering kept secret, in order to protect everyone except the abused. The final strains of “I wish I could tell you…” sum up the energy of the EP…everything’s just fine, but we wish we could tell you the truth: it’s not.

Parental Advisory: Track #3 (Letter to an Ex Song) is not suitable for listeners under 18 or listeners who may be sensitive to violent imagery in lyrics.